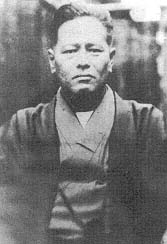 Goju was founded in the late 1920's by Chojun Miyagi. Chojun Miyagi was born on April 25, 1888 in Naha, Okinawa. He studied under Kanryo Higaonna, the founder of Naha-te.

Go" means Hard, and "Ju" means Soft, while Ryu means way or Way of Life, hence the Goju-Ryu translation indicating the Hard & Soft Way of Life". The Goju-Ryu style is a blend of Okinawan Te (Hard) and Shoalin Kung Fu (Soft), with emphasis on the White Crane style. Other Chinese influences include Pakua Chang, I Chuan, and Tai Chi Chuan, which Sensei Miyagi studied on several trips to the Chinese mainland. Master Miyagi was particularly interested in the breathing exercise of the Zen monks. The breathing aspect is one exercise that distinguishes the Goju school from all others. Breathing methods are used by different martial arts schools, however, they are not quite the same as those of Goju. Returning from intense study in China, Master Miyagi decided to organize a systematical instruction of the art of karate do. He established the Goju school, the first instructional organization in the field of martial arts. This was an advanced stage of instruction, where only self-defense techniques were taught to selected individuals.

Master Miyagi started teaching karate in public schools and other public establishments. He literally devoted his life to the art of karate do. Although he was born into a rich family of noble class, all his material inheritance was used for the promotion of karate do.

Goju-Ryu is a close range system, characterized by circular blocks, joint manipulations and kicking techniques to lower body targets. Dynamic tension and breathing are major elements in its training and is incorporated in many of the katas.

Sensei Miyagi died on October 8, 1953 at the age of 65. Following his death, four of his senior students opened their own schools. Seiko Higa carried on as Sensei Miyagi's immediate successor. Meitoku Yagi formed the Meibukan, while Sensei Toguchi formed the Shorei-kan, and Eiichi Miyazato formed the Jundokan.

Later, in 1963, the Miyagi family presented Sensei Miyagi's gi and belt to Meitoku Yagi, officially making him the head of the Goju-Ryu system. Master Yamaguchi received the 10th Degree Red Belt (master's rank) and is the highest rank in the Goju system.

Upon Master Miyagi's death in 1953, Master Gogen Yamaguchi became the successor to the Goju school. 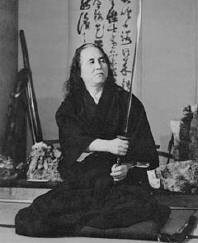 Gogen Yamaguchi studied with Chojun Miyagi and went on to promote the style in Japan. Gogen Yamaguchi, who was also known by his nickname "The Cat", was born on January 21st, 1909. His first formal training was in Jigen Ryu kenjutsu, the style of the Satsuma samurai who invaded Okinawa in 1609. Later he trained under Takeo Murata, a Naha-te stylist.

Gogen Yamaguchi founded karate at Ritsumeikan University just prior to meeting Chojun Miyagi in 1929 on one of his visits to Japan. In 1935 he formed the All Japan Karate Do Federation Goju Kai, which succeeded in unifying some of the major Japanese karate schools of the time. In 1936 Master Yamaguchi initiated Jiyu Kumite (free sparring), which evolved into the basis of sport karate systems used today.

In 1939 Master Yamaguchi was sent to Manchuria as an intelligence officer. He was captured after the war by the Russians and imprisoned until 1947. His captors treated him cruelly, but could not erode his courage.

Gogen Yamaguchi's son Gosen was among the first to open a Goju Ryu dojo in the United States in 1963. His other son Gosei followed in 1964, and still heads the Goju-Kai from San Francisco.

He was instrumental in the creation of the All Japan Karate-Do Federation in 1964, which successfully unified some of the major schools of the time. He was awarded the Ranju-hosho from the Emperor in honour of his achievements. In 1966, he wrote "Karate: Goju-Ryu by the Cat".

He died on May 20th, 1989 at the age of 80. His legacy lives on through his sons (Gosin, Gosei and Goshi) and his many students, notably Peter Urban, Seigo Tada, Alberto Evangelista and Bob Dalgleish. 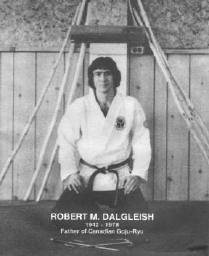 Sensei Bob is the reason it's called "Canadian Goju". Had Sensei Bob simply gone to Okinawa, study karate and return to Canada to teach, it would have been called Okinawa Goju. However, Sensei Bob had influences from Chito Ryu, Shotokan, Ishin Ryu, USA (Urban) Goju, Okinawa Goju, Yamaguchi Goju, KyokuShin-Kai and more. These many influences eventually evolved into what is known as Canadian Goju Ryu.

Sensei Bob was an martial arts aficionado. He loved to travel and he loved karate. He traveled frequently to meet and exchange martial arts information with so many martial arts masters.

The following excerpts were taken from the Goju Kai Karate Dojo Handbook. Reprinted without permission

Master Bob Dalgleish started his initial training in 1959 under the guidance of Master Masami Tsuruoka, 9th Dan and head instructor of the Chito Ryu style of karate do in Toronto, Ontario. Master Dalgleish studied with master Tsuruoka for a period of two years after which he journeyed to California to continue his studies under Shotokan Master Hidetaka Nishiyama. Remaining with Nishiyama for a period of two years off and on, Master Bob Dalgleish attained the level of 1st kyu brown belt in the Shotokan School of karate-do.

In 1965, Sensei Dalgleish taught in Vancouver, B.C. and was elevated to the level of 3rd degree black belt by Master Masutatsu Oyama of the KyokuShinKai style. Master Dalgleish stayed in Vancouver and established a dojo there and then returned to Toronto, Ontario where he introduced the Shotokan style and KyokuShinKai style to Eastern Karate Club.

Between the years of 1965 and 1967, Master Dalgleish journeyed from Toronto to New York, several times to learn Japanese Goju style under Master Peter Urban. However, Sensei Dalgleish had to start at the bottom and wear a white belt for a period of 2 years and after a 2-week grading period, he was again recognized as his previous rank of 3rd degree black belt by Master Urban. Sensei Dalgleish then returned to Toronto and introduced the Goju style to Canada via the Eastern Karate Club.

Between the time periods of 1967 and 1968, Master Dalgleish traveled to Phoenix, Arizona, to train with Master Robert Trias, 8th Dan and founder of the United States Karate Association. Master Trias, without any doubt graded Master Dalgleish to 4th degree Black Belt and instructed him in the Okinawan Shorei style of Karate-do.

Master Bob Dalgleish traveled to Sudbury, Ontario in 1970 to establish the Sudbury Goju Kai Karate Dojo, until his death in 1978. The Canadian Goju style was left to his students Yogi Israel Segarra, Don Gauthier, Don Benoit, Bill Hinds & Don Warrener to continue to the very best of their ability to promote the martial arts favorably to the general population. 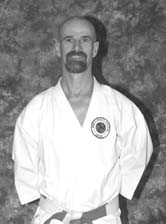 In 1972 Don Benoit started training under Master Bob Dalgleish at the Sudbury Goju Kai Karate Dojo. Don's insatiable appetite for karate and diligent training earned him his black belt in just over one year. His journey in the martial arts has continued throughout the years.

From 1981 to 1989 he ran Sudbury Goju Ryu. In 1993 Benoit's Marital Arts evolved. World Champions have gotten their start at Benoit's Martial Arts  under Don's guidance. Don Benoit also distinguished himself as a competitor in kata and won Super Grands World NBL Titles for kata in 1997 and again in 1999.

Don is a member of the Karate Canada and received his dan recognition and accredited as a sixth degree black belt, through the NKA (Canada) in 2002. In 2003 the NKA accepted Don's application for style recognition and officially registered Benoit's Goju-Ryu Karate-Do as it's own style. This evolution lead to his clubs name change when Don became the founding president of Benoit's Goju-Ryu Karate-Do.

Don Benoit had the honour and privilege of training under Grandmaster Gosei Yamaguchi at his home dojo in San Leandro, California.

In 2011 Shihan Don Benoit was awarded the prestigious Syl Apps Award in a formal presentation by Ms. Best, Minister of Health & Sport for the Province of Ontario. On March 15th, 2012 Shihan Benoit achieved his 7th Dan Black Belt with Karate Canada.

Don is currently sought after for his expertise by Karate Ontario and Karate Canada for his judging and refereeing expertise.

Oops! This site has expired.

If you are the site owner, please renew your premium subscription or contact support.